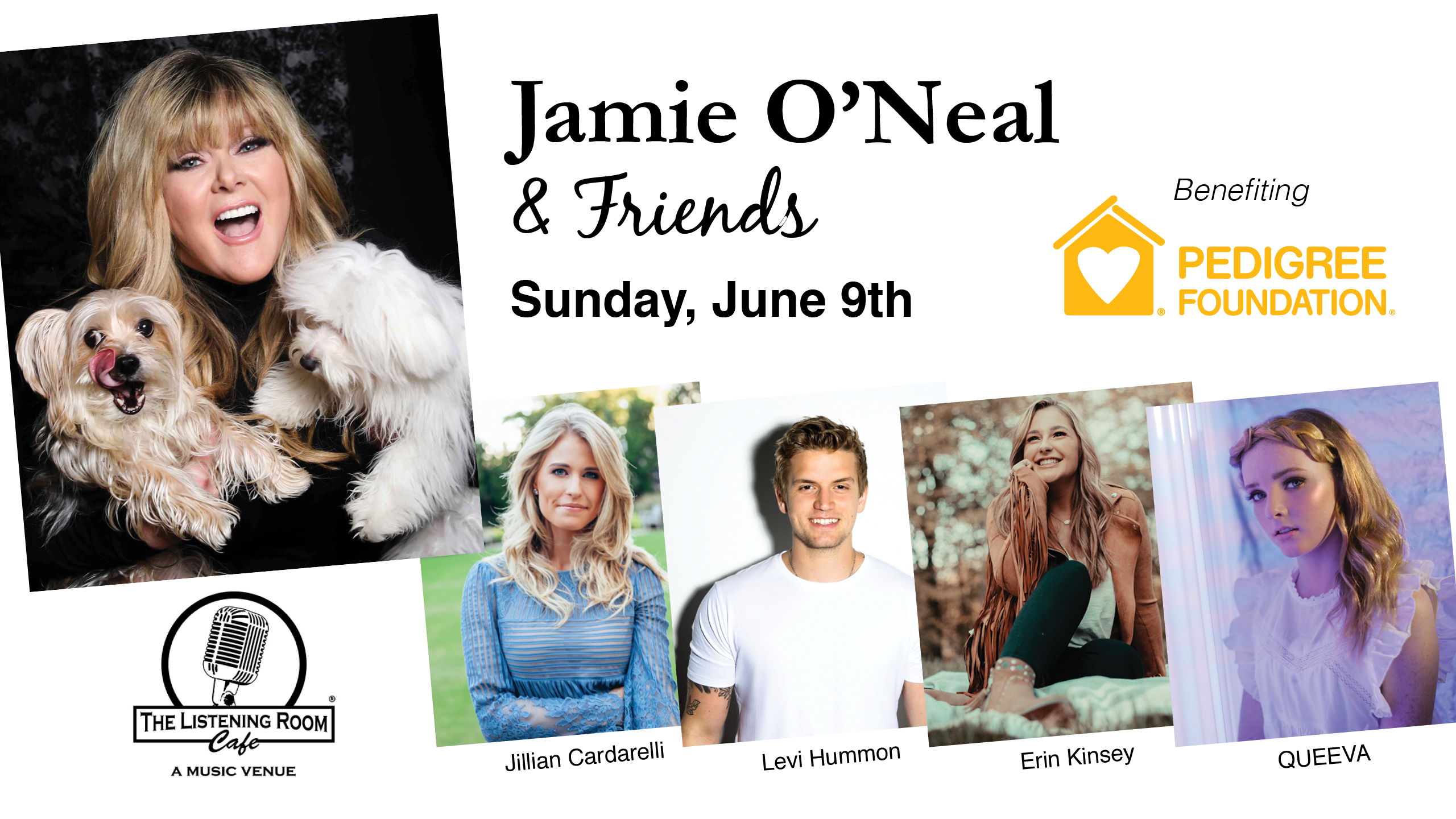 “I am honored to support PEDIGREE Foundation and the incredible work they do across the country to help end dog homelessness,” said Jamie O’Neal. “I’m grateful for my fellow dog-lovers and singer-songwriter friends that are joining me in support of this important cause and we’re asking festival fans, and locals alike, to come out to ‘pawty’ with us and help raise much needed funds for dogs in need.”

PEDIGREE Foundation is a 501(c)(3) private foundation, founded in 2008, that supports shelters and rescue organizations, as well as encouraging people to ADOPT, VOLUNTEER, and DONATE. At the close of 2018, the foundation contributed more than $7.3 million through 5,300 grants to shelters and rescues across the country. The PEDIGREE Foundation grants are funded by the PEDIGREE® Brand, contributions from partners and dog lovers like you. The funds raised by the foundation are used to support organizations that help dogs in need find their loving homes — helping to end pet homelessness.

Tickets to Jamie O’Neal & Friends, PEDIGREE Foundation’s “Music Pawty” are $25 (plus $15 food and beverage minimum day of show). Tickets are on sale now at The Listening Room Café at https://listeningroomcafe.com/tc-events/jamie-oneal-friends-benefiting-pedigree-foundation/

For more information about sponsorship opportunities, updates and how to donate to the cause, please visit the PEDIGREE Foundation at www.PEDIGREEfoundation.org.

Since the release of her debut album in 2000, Jamie O’Neal has been impacting country music with her soulful voice and the immense amount of passion behind every word she sings. She became a household name with her single, “There Is No Arizona,” which set her path to stardom on fire with multiple No. 1 hits and 2 Top 5 records as well as and many career accolades to follow, including four GRAMMY nominations, ACM Top New Artist and Billboard Top New Artist. She has toured with Reba McEntire, Kenny Chesney, Martina McBride, Alan Jackson and more, and her songs landed on the soundtracks of Bridget Jones’ Diary, When We Were Soldiers, as well as on the ABC smash Desperate Housewives. She has also appeared on numerous national television programs, including multiple appearances on The Tonight Show with Jay Leno, Late Show with David Letterman, Entertainment Tonight, Access Hollywood and many others.  For more information about Jamie O’Neal, please visit https://www.jamieoneal.com/ and follow her on Facebook and Instagram.

This singer/songwriter is originally from Boston, MA who is forging her own path in country music with her stunning vocals, captivating songwriting and girl next door quality.  Rolling Stone ranked Jillian at the top of their list of 10 New Country Artists You Need to Know and Nashville Lifestyles Magazine highlighted Jillian in their annual Music in the City issue as one of the Top New Artists to Watch in 2018. Jillian made tour appearances with Lonestar, Jake Owen, Jana Kramer and Easton Corbin on the heels of the release of her debut single, “Rerun” that was written by Grammy Award-winning artist Maren Morris, Tina Parol and Jordan Reynolds. The music video of “Rerun” was showcased as part of CMT’s Artist Discovery initiative, spending two weeks at #1 and several weeks in the Top 10 videos on CMT due to fan voting. Her second single, “Souvenirs,” aired on Radio Disney Country while the music video spent eight weeks in the Top 10 videos online on CMT. She’s made appearances at CMA Fest, appearing on Radio Disney Country stage. She is currently working on her debut album set to release later this year. For more information, visit her website at www.JillianCardarelli.com or Facebook and Instagram at @JillianCardarelli.

Born and raised in Nashville, Tennessee, Levi Hummon was surrounded by music greats, however, it wasn’t until he was studying painting in college that he began to explore his dormant musical talents, singing and songwriting, as a way to navigate his life and relationships. He quickly developed his own unique personal sound with the help of his father, GRAMMY-Award winning songwriter Marcus Hummon. Levi soon found himself working with notable songwriters such as Jimmy Robbins, Shane McAnally, Andrew Dorff, Josh Osborne, Jonathan Singleton, Nathan Barlowe, and more. Levi Hummon also wrote with legendary entertainer Steven Tyler on past hit “Red, White and You.” With over 25 million streams in less than a year as an independent artist, Hummon has been named one of Entertainment Weekly ’s 5 Breaking Artists Now and one of Rolling Stone Magazine’s Artists You Need to Know. “Stupid,” debuted on Billboard ’s Top Country Songs chart and remained for two weeks as the only song by an unsigned artist and was named to Amazon’s 2017 Best of Country Songs list. Hummon’s current single, “Change My Life” is available now and fans can expect a new EP later this fall! For more information, visit www.levihummon.com.

Erin Kinsey is a gifted songwriter, artist and highly accomplished musician, playing seven instruments. Whether it’s listening to her booming voice, or observing her skillful multi-instrumental abilities, it’s hard to imagine that this Rockwall, Texas native began singing and playing guitar at the age of 11 and started performing in public as a solo singer-songwriter just a few months later. Now living in Nashville, this 18-year-old has been perfecting her craft under the tutelage of some of the biggest names in music. For the last several years, this talented young lady and her band have been wowing audiences all over the world playing shows and songwriter rounds at C2C Festival, Bluebird Café, Disney and CMA Fest. In 2018, Kinsey opened for Hunter Hayes during the Rock ‘n’ Roll Marathon Concert benefiting St. Jude Children’s Hospital at Ascend Amphitheater. Her obvious talent as a musician, songwriter and a killer voice make her poised for huge success in the near future. For more information about Erin Kinsey, please visit www.ErinKinsey.com or socialize with her on Facebook: @ErinKinseyOfficial or Twitter and Instagram at @ErinKinseyTX.

QUEEVA already has a list of accomplishments longer than many artists double her age. The 15-year-old powerhouse and high School freshman was recently voted one of Nickelodeon’s Fresh Faces and has garnered over one million streams on Spotify and YouTube. Most recently, she released a new song, titled “How Do You Know” in which an official music video was also released and world premiered on CMT.com. Born in Chicago, IL, QUEEVA was raised with five siblings in a creative Irish clan speaking both Gaelic and English and dividing her time between the US and Ireland. In fact, her name, sometimes spelled Caoimhe, means, “gentle,” “beautiful” or “precious” in that language.  Early on, QUEEVA gravitated to Country music’s greatest storyteller-artists who were skilled in illumining their everyday experiences in a song. She then went on to compete in talent contests all over. QUEEVA started to earn a name for herself at a very early age when she landed national TV spots, including an acting role in an episode of Chicago Fire, a role in a Build-a-Bear commercial, among others.  For more information, visit QUEEVA here or on social media: Facebook, Twitter, Instagram, YouTube, Spotify, and Apple Music.